skip to main | skip to sidebar

In a holiday rut? If getting over the river and through the woods seems like an overwhelming challenge, perhaps it’s time to build your creative problem solving. Here’s how:
Write
Challenge your brain
The brain is like a muscle. The more active it is, the larger and more complex it becomes. Eric Kandel won the Nobel Prize for showing that when people learn something, the ‘wiring’ of their brains change.
Broaden your interests/circle
Take adventures once a week
Take a break and do something different while your brain incubates
The brain needs space to assimilate and incorporate ideas. The Greek mathematician and mechanical wizard Archimedes was stepping into a bathtub when the principle of fluid displacement came to him.
Exercise
Play
Creative revelations come to most people when their minds are involved in an unrelated activity. This is because the brain continues to work on a problem once it has been supplied with the necessary raw materials. Connections between ideas and imagination that already exist in the mind become weaker and are transformed by new information. A little relaxation and distance changes the minds perspective on a problem; the brain has the opportunity clear away thought barriers and newly combined associations break through.
at 8:56 AM No comments:

I know someone who locks her keys in the car whenever she is in a hurry to get somewhere. Plane leaves in an hour? Her keys are in the car – potentially it’s running and her cell phone mocks her from its perch in the passenger seat. Important meeting? You guessed it…keys safely locked inside the car.
The stress of making a flight or arriving on-time for a meeting is the straw that breaks the proverbial camel’s back. My friend suffers from neurotic stupidity.


Of course, locking her keys in her car is just one symptom. She’s also been known to confuse her children’s names, her phone number and forget to pick up the aforementioned children from soccer practice.
What can she do about neurotic stupidity?
Stress and tension are the roots of the problem. Learning to manage them will help her think more clearly and concentrate more easily.
Easy things she can do include:
Regular aerobic exercise – even if it’s just a brisk thirty-minute walk
Meditation
Breathing Exercises
If she learns to manage her stress and tension, she just might remember when her daughter’s next soccer game is.

What does stress have to do with cancer?
Cancer is a problem of uncontrolled growth – the cells grow out of control and faster than they should. Cancer is an activation of growth genes – called oncogenes.
Most studies relating stress to cancer have been done in the laboratory with animals. In those studies, findings suggest that stress may bring on cancer and accelerate the progression of cancer.
The problem with the studies is that they inject the animals with cancer cells prior to or after they subject them to stressors. Do you see the problem? We aren’t injected with cancer cells, so we really can’t say that these lab animal studies are pertinent to human cancer.
In human studies, proving stress as a cause of cancer relationship is difficult. Most human studies are retrospective – taking place after someone has been diagnosed with cancer.
Prospective studies are more meaningful. These are the studies that follow people from a younger age into old age and look at different variables, including rates of disease. Here, the cancer/stress relationship falls apart.
What about the stress/relapse relationship? Not much evidence here either – the evidence is minimal.
And finally, what about the rate of progression and stress? Recent research suggests there may be a relationship between progression and stress.
John Cacioppo, PhD, from the University of Chicago and Steve Cole, PhD, from the University of California, Los Angeles are studying the way genes and environment interact to influence behavior and health – called social genomics, a division of molecular biology.
Here is what they are finding:
Susan Lutgendorf, PhD, from the University of Iowa and Steve Cole, PhD, from UCLA found that social circumstances influence gene expression in cancer cells. More than 220 genes were turned on in the cancer cells of women with low levels of social support and high levels of depression. These same genes were not active in women who did not have social stress. Some of those genes are associated with higher rates of cancer metastases.
Overall, the science isn’t there to suggest that stress directly effects whether or not we get cancer. Our bodies are much too elegant and complicated to make such a simple statement. However, once someone has cancer, it is in their best interest to do as much as they can to help support their emotional and physical health in order to live as well as they can for as long as they can.
Moira
at 9:01 AM No comments:

What we can learn from Osmosis Jones

Did you ever see the movie Osmosis Jones? It was on television a few nights ago and I watched it.
Osmosis Jones (voiced by Chris Rock) is a cell that lives in Frank (played by Bill Murray). Frank doesn’t take particularly good care of himself and Osmosis and his fellow ‘cops’ have a tough time keeping Frank healthy. It is their job to identify pathogens and either attack them or create antibodies to neutralize them. Besides being an animated cop, Osmosis is an immune cell. 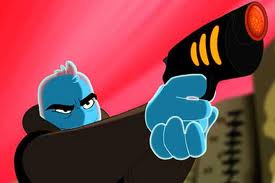 Osmosis taking out a pathogen.
There are two categories of immune cells, also called lymphocytes – T Cells, which originate in the thalamus, and B Cells, which originate and mature in the bone marrow.
Bill ’s character, Frank, has practically no stress in his life. His biggest concern seems to be getting to the Buffalo Wing Festival.
For those of us with more on our minds than wings and dipping sauces, stress is a concern. When you activate your immune system over and over again with short term stressors, you increase the likelihood of the immune system overreacting and wreaking havoc with your health – which can trigger autoimmune diseases or make any condition you already have worse.
Learning how to effectively manage stress is essential to long-term health.
Meditation, relaxation and regular aerobic exercise can all help you stay healthy.
At the end of the movie, Osmosis Jones saves the day (or Frank) and Frank decides to make healthier choices – including exercise and a more balance diet (think vegetables instead of chicken wings).
Like Frank, we can make a conscious decision to lead healthier life-styles. Even small changes can yield big results.
Moira
at 8:39 AM No comments:

‘Oxide’ is a chemical term. It refers to a compound in which oxygen is bonded to one or more electropositive atoms. It makes me think about the rust on a bicycle fender, a cut apple that turns brown or a green penny. Oxidation is NOT something I want happening in my brain.
The brain consumes a large quantity of oxygen, making it susceptible to oxidative stress.
What to do?
Try introducing naturally occurring antioxidants into your diet. Antioxidants  convert free radicals to harmless waste products that are eliminated from the body before any damage is done.
Think of antioxidants act as scavengers that help prevent cell and tissue damage.
Knowing which foods have the most antioxidants is important, because your body needs all the help it can get to fight disease-causing free radicals.
The top ten antioxidant rich foods?
1) Small red beans (dried)
2) Wild blueberries.
3) Red Kidney beans.
4) Pinto beans.
5) Blueberries (cultivated)
6) Cranberries.
7) Artichokes (cooked)
8) Blackberries
9) Prunes
10) Raspberries
Don’t forget spices – especially powerful are cloves, turmeric and cocoa. McCormick has a handy chart.
Finally, you can drink antioxidants. Grape juice, red wine, green tea and pomegranate juice are all excellent choices.
Bon Appetit!
Moira
at 11:25 AM No comments:

In 1950, people could expect to live about eight years after retirement. In 2011, retirees can expect to live for 20 years. The difference is due to increased life expectancy and earlier retirement ages. No matter how old you are, there are things you can do NOW to ensure you enjoy a vibrant, healthy retirement with an active, curious mind.
The factors most closely linked with maintained mental function late in life include:
•           Higher Education – This doesn’t mean you have to go back to school. What researchers think is that people who pursue a graduate degree are curious and that school teaches you how to learn.
•           Aerobic exercise
•           Traveling
•           Hobbies – especially complex hobbies like playing bridge or chess
•           Learning a new language
•           Learning to play a musical instrument
Another tip - watch less TV – your brain goes into neutral and that’s not a good thing.
Also, don’t overlook exercise! Even a brisk daily walk can yield big returns.

The brain begins to lose nerve tissue beginning at age 30 (yikes!). Aerobic exercise tends to reinforce neural connections by increasing the number of dendrite connections between neurons, creating a denser network. A dense network is better able to process and store information. Exercise may even aid with the production of new neurons.
As if that wasn’t enough, aerobic exercise is strongly protective of brain functions. And, the effect is largest if you start in middle age.
And, it’s not just your brain that will benefit. Regular exercise leads to:
·         Improved cardio health
·         Reduction of depression
·         Better cardiovascular function
·         Better bone health
·         Better body composition
Think of it as saving for the future – your future health!

The ability to resist impulses and delay gratification (or willpower) is highly associated with success in life.
What limits willpower? What enhances it? It might be blood sugar, an essential energy source for brain cells. Most cognitive functions aren’t affected by minor blood sugar fluctuations. Planning and self-control are.
In essence, exerting self-control lowers blood sugar, which reduces the capacity for further self-control. This is how diet might play a role in will-power. Certain foods that help regulate blood sugar, like those containing protein or complex carbohydrates, may enhance willpower for longer periods.
Imagine you have a willpower budget – one that you can spend bypassing temptation or making yourself complete unloved tasks. How you spend your budget is up to you.
The good news? You can increase your budget. Willpower can grow in the long term. Like a muscle, it seems to become stronger with use. The idea of exercising willpower is seen in military boot camp, where recruits are trained to overcome one challenge after another.
Use your non-dominant hand to brush your teeth for two weeks. Believe it or not, this can lead to a measurable increase in your willpower capacity. People who do this can stick with an exercise program or diet longer. It also reduces impulsive spending, smoking, and eating junk food.
Also, people who stick to an exercise program for two months report reducing their impulsive spending, junk food intake, alcohol use and smoking. They also study more, watch less television and do more housework.
The growth of willpower reflects a biological change in the brain. It could be that the neurons in the frontal cortex (responsible for planning behavior) or in the anterior cingulate cortex (associated with cognitive control) use blood sugar more efficiently after repeated challenges. Perhaps the chemical messengers that neurons use to communicate with one another are produced in larger quantities after they have been used up repeatedly.
Whatever the explanation, consistently doing any activity that requires self-control seems to increase willpower.
May the force be with you.
Moira
at 9:07 AM No comments: